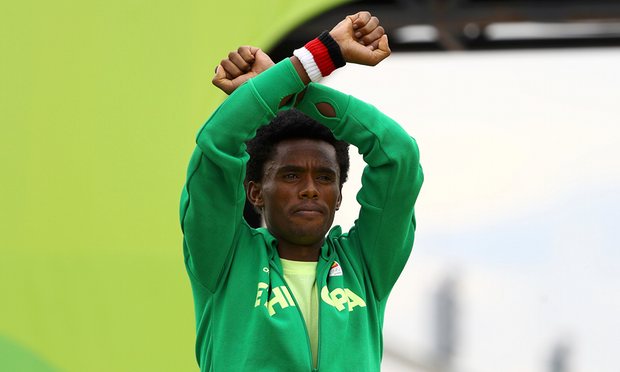 Welcome to the Evolving Man Project’s ‘Evolved Man of the Week’ profile. Each week, we highlight an individual who embodies what it means to be an evolved man, famous and non-famous men alike. The world needs to know their stories and deeds. This week’s honor goes to human rights activist, Olympic Silver Medalist, athlete, and world-renown long-distance runner Feyisa Lilesa. Feyisa Lilesa knew his shot at Olympic glory would give him a global platform to stand in solidarity and give a voice to the  voiceless people of his native Ethiopia:

“I’m an athlete. I run long distances. Running has allowed me to travel. Beyond that it has allowed me to be the voice of my people. Running is life for me. It is also how I make a living so I look forward to continuing to race and pursue my dreams.”

Feyisa Lilesa came from humble beginnings. He is the son of farmers and raised in a rural community of Oromia, Ethiopia. He hasn’t forgotten about where he came from. In the 2016 Olympics in Rio, he used one of the world’s biggest stages to bring the struggle of his Oromo people to the global masses. They are one of the largest ethnic groups in the country but face political, economic, and social disfranchisement by an authoritarian government. Mr. Lilesa follows in the tradition of Tommie Smith and John Carlos 1968 Olympic protest, and NFL Quarterback Colin Kaepernick. In that same vein, Mr. Lilesa used his elite athletic abilities and skills to gain a global platform to shine a light on injustice and struggle of those people often forgotten by society. In his own words:

“I don’t want to look at my children any differently from the children of my country that are being killed.”

In summer 2016, Feyisa Lilesa reached the peak of his career and won a silver medal at the Rio Olympics. He used that spotlight and career-defining moment not to focus on himself, but to focus on the Oromo people.

“His use of the crossed wrists – used by anti-government protesters as a sign of peaceful resistance, and meant to symbolize being handcuffed by security forces.”

His act of protest ensured that he would risk death or imprisonment if he returned to his homeland. He knew the consequences of his actions, knowing he would need to seek asylum. This didn’t deter Mr. Lilesa, and he has sought asylum in the United States. Today, lives in the U.S. on a visa.  Feyisa Lilesa warned the international community of consequences of continued inaction if justice isn’t brought to the Oromo people of Ethiopia.

“I am personally very fearful this is going to take an ethnic dimension. You are going to see a Rwanda-like scenario where ethnic groups turn on each other. It is important the international community understands the gravity of the situation and intervenes so we don’t have to go there.”

Today, we honor Feyisa Lilesa has this week’s Evolved Man of the Week.