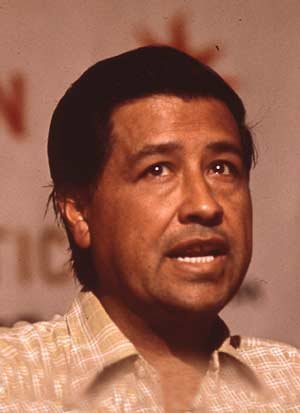 Welcome to the Evolving Man Project’s ‘Evolved Man of the Week’ profiles. Each week we will highlight an individual that embodies what it means to be an evolved man, famous and non-famous men alike. The world needs to know their stories and deeds. This week’s honor goes to the civil rights icon, labor leader, activist, veteran, and Chicano legend, Cesar Chavez.

Born in Yuma, AZ on March 31st, 1927. His family faced injustice early on in his life. A greedy landlord broke his father’s land contract and refuse to sell him the acres he worked for years. During his youth, Mr. Chavez attended more than thirty-seven different schools and didn’t care much for his educational experiences due to poor schooling. This would change later in his life, he believed that “The end of all education should surely be service to others,” a belief that he practiced until his untimely death.

Cesar Chavez joined the Navy at the age of nineteen in 1946. He would go on to marry his high school sweetheart, Helen Fabela two years later. After his Naval Service, Cesar took work as an organizer in San Jose, CA. He became the founder of National Farm Workers Association or better known as the United Farm Workers in 1962.

Cesar and his allies fought hard to educate the larger society to raise awareness around the struggles of farm workers. They used nonviolent tactics to gain worker rights and fairer wages. To highlight farm workers benefits, the dangers toxic pesticides, and denial of fair and free elections. These methods and protest strategies were influenced by the civil rights movement, Dr. King, and Gandhi. Fasting was a massive part of Cesar’s civil disobedience. Cesar Chavez completed his 36-day Fast for Life on August 21, 1988. The Reverend Jesse Jackson took up where Cesar left off, fasting on water for three days before passing on the fast to celebrities and leaders. The fast was given to Martin Sheen, the actor; the Reverend J. Lowery, President SCLC; Edward Olmos, actor; Emilio Estevez, actor; Kerry Kennedy, daughter of Robert Kennedy, Peter Chacon, legislator, Julie Carmen, actress; Danny Glover, actor; Carly Simon, singer; and Whoopi Goldberg, actress. Cesar would pass away on April 23rd, 1993.

Here is Cesar Chavez in his own words about community and uniting people across the color lines:

“We have many different professions among us: lawyers, doctors, engineers, laborers, teachers. They come for varying lengths of time. Some stay most of their lives; others come for only two or three years. But out of all this mass of people, we are trying to make a community. And we call it La Paz. We live and work there. It is a kind of center, not yet a community, but someday maybe.”

Today we honor the legend Cesar Chavez as our Evolved Man of the Week.