Welcome to the Evolving Man Project’s ‘Evolved Man of the Week’ profiles. Each week we will highlight an individual that embodies what it means to be an evolved man, famous and non-famous men alike. The world needs to know their stories and deeds. This week’s honor goes to the business owner, founder of Motivation Forward Inc., and author, Benjamin C. Graham.

Benjamin Graham is an Atlanta resident and business owner of “Big Mouth Ben’s Convenience Store,” but he wasn’t always a business owner – in fact, he used to be homeless and addicted to drugs. Ben dropped out of college due to depression. His life soon spiraled out of control, landing him on the streets of Atlanta in his young adulthood. He lived on the Auburn Avenue for years and following a tragic work accident left him in a wheelchair he was forced to get creative to survive

Graham said he lived under the Auburn Avenue bridge for four or five years and contemplated suicide once. He finally hit bottom after being arrested on six drug charges and ordered to drug treatment court. Graham went into a dual treatment program for his addiction and his mental problems. Around that time, Graham reunited after 24 years with his college sweetheart, Tanya. The two married in 2015.

Graham has been running the convenience store about a block from the national memorial to King since 2015 and is always looking for ways to boost foot traffic. The area’s homeless are welcome in the store and are offered free sodas, snacks, and something off a rack of donated clothes.

A mobile shower for the homeless is brought in on weekends. And last year, Graham started selling vouchers redeemable in his store to people who want to help the homeless. He has published a book about his life and founded the nonprofit Motivation Forward Inc. with his wife to provide peer support to addicts and the mentally ill. He also sits on the board of Partners for a Home, an organization that helps the homeless and mentally ill.

Here is Ben Graham in his own words about change and redemption:

“My story is not pretty but it’s beautiful,” … “I was once under a bridge wearing mismatched shoes and, now, I’m in Publix buying balloons.”

His story of one of tragedy, hope, and second chances. Today we honor Ben Graham as our Evolved Man of the Week. 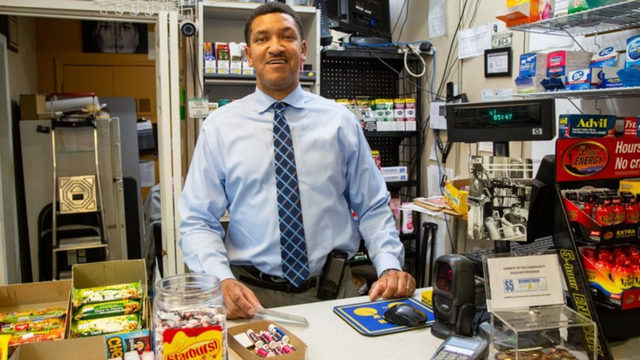