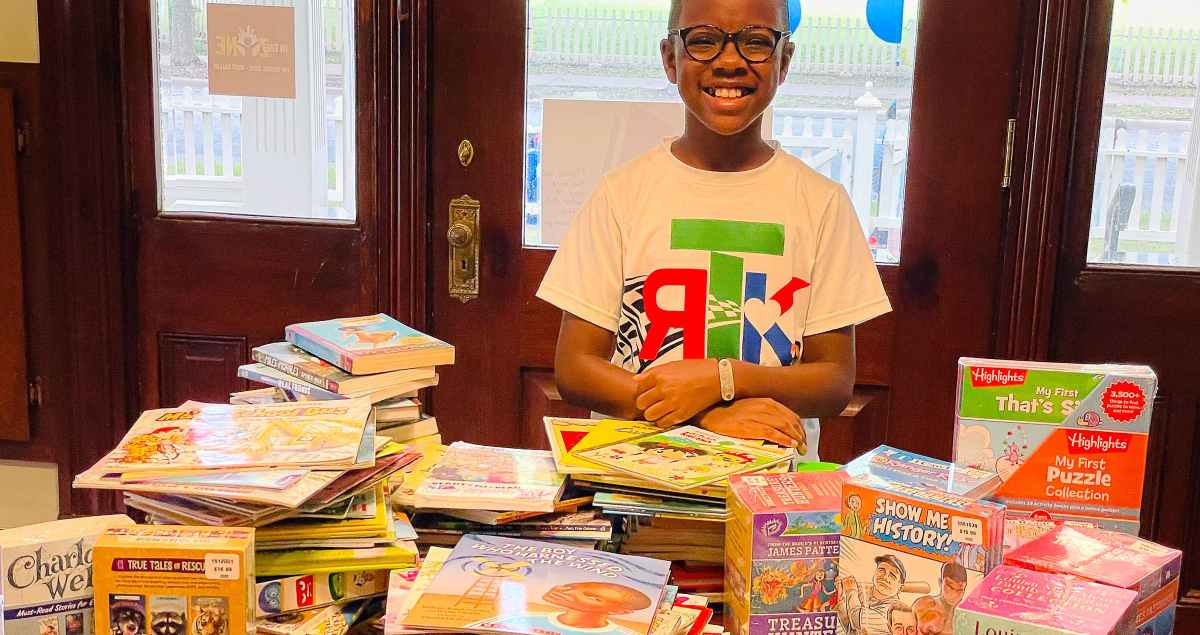 Welcome to the Evolving Man Project’s ‘Evolved Man of the Week’ profiles. Each week we will highlight an individual that embodies what it means to be an evolved man, famous and non-famous men alike. The world needs to know their stories and deeds. This week’s honor goes to Texas native, founder of Race to Kindness, and ten-year-old, Orion Jean.

He plans to collect 500,000 books for kids in need and has gathered 40,000 so far. When Orion Jean won the National Kindness Speech Contest last year, the then nine-year-old could have saved the $500 prize for his college fund (or blow it on Legos) and called it a day. Instead, he used his winning speech as a launchpad for a year-long effort to spread kindness across Texas and around the country. With the help of his mother, Kherri Jean, he set up a website called Race to Kindness last summer. Then he was on the lookout for his first project.

He decided to start by donating toys to sick kids at Children’s Medical Center Dallas. “These kids are my age, and they’re just kids like me,” he recalls thinking before he launched a drive for five hundred toys in August 2020. Jean’s parents had helped him set up social media pages, and he filmed videos about the toy drive for them to post on his behalf. Donations began streaming in, and he collected and donated 619 toys to the hospital in only a month.

An avid reader, Jean says he saw a statistic stating that two out of three kids living in poverty have no own books. He decided to collect 500,000 books for disadvantaged children. So far, he has gathered some 40,000 books and hopes to have the rest by the end of August, after at least two more book drop-off events he’s scheduled in the Dallas–Fort Worth area.

Orion Jean is only 10 years old, but after winning a student kindness contest in 2020, he’s caught the generosity bug: The number of books he’s currently hoping to pool in donations for other kids in Texas? Half a million.

Here is little Orion Jean in his own words:

“Kindness is a virtue we can all possess. If we are willing to,”…“So why not start today. Because right now, it’s what we need more than ever.”

We at the Evolving Man Project wish Orion Jean continued success as he supports those in need. Orion’s right the world needs more kindness, and he’s is wise beyond his year during his part. The world is a better place with him here, and we hope he continues to inspire others. Today we honor Orion Jean as our Evolved “little” Man of the Week.