That same year, the GOP lost (due to the George W. Bush presidency and John McCain’s uninspiring campaign). On November 7, 2008, the country elected its first black President, Barack Obama. It was the first election that many millennials vividly remember, and the first one, many of us, voted in. It seemed that America had turned over a new leaf. Many liberal pundits and talking heads were claiming that this country was headed towards a ‘Post-Racial’ society. I personally knew that this was bull. But many people thought the election of a black man to the highest office in the land signaled that America had finally overcome its racist and tragic past. 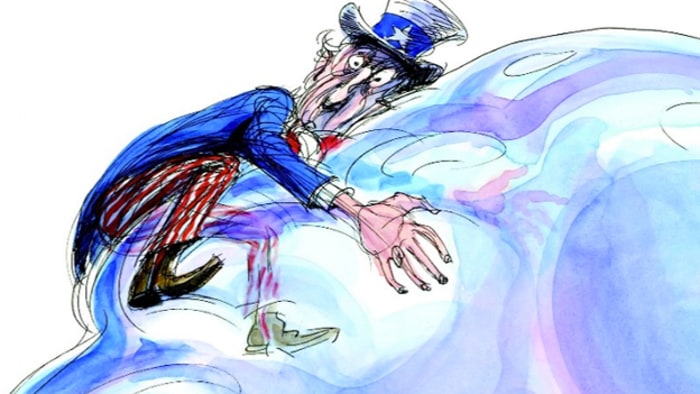 Almost immediately after the election, the Tea Party came onto the scene and shattered that illusion of a post-racial America. The rise of the Tea Party (and the ‘Birther’ movement that claimed President Obama wasn’t born in America) hindered Obama’s first term. The Tea Party and the Birthers represented and emboldened a segment of the country that was angry about the notion of a black president. We were not, as it turned out, so post-racial after all.

The crash of the housing market and the onset of the Great Recession soon ushered in a social movement that became a voice of the frustrated left. In 2011, Occupy Wall Street hit the scene and changed the conversation around income inequality, making “the 99%” part of the American and global lexicon. Economic insecurity and uncertainty led to the need for scapegoats and the need for someone to save us all.

Eventually, economic insecurity and uncertainty led to the need for scapegoats–terrorists, illegal immigrants, feminists, black people–and need for someone to save us all. But where was the supposed “savior?”

Fast forward to 2016. The GOP has reached its zenith of xenophobia, racism, and isolationist tendencies, as demonstrated at last week’s Republican National Convention. Many of this extreme right-wing have found their scapegoats and their supposed savior: Donald J. Trump. The ascent of the GOP nominee Donald J. Trump to party frontrunner to the official nominee for president of the United States has been nothing short of fascinating. Trump, who has claimed that only he can save us all, has no policy proposals besides building a wall at the US-Mexico border and providing more tax cuts for the wealthiest Americans. Yet Trump has managed to make Middle America embrace him.

By using the oldest trick in the book of American politics: white racism and blaming darker-skinned peoples for the problems of white America.

Good old fashioned racism mixed with decades of economic decay has led to the rise of Donald Trump, whom Pat Buchanan called him the “Great White Hope.” He supposedly embodies the strong, manly, white guy who will return America back to a mythical glorious ‘1950s’ time-period. Good old fashion American racism has led to this celebrity, orange Dr. Evil impersonator, possibly becoming the president of the United States.

What conditions have made this possible?

Since the recession, the rust belt has become more rusted and depressed. Unemployment and the housing market is still standing on shaky ground. The wealth gap between rich and poor has reached levels not seen since the Great Depression. People are working more hours, for lower wages, with no retirement in sight, little or no vacation time, and younger people have been buried by ridiculous amounts of student loan debt. Those on the extreme right-wing have found their scapegoats: Mexicans and black people who commit crimes, and Muslim terrorists. And they have anointed Donald Trump, their savior.

America has reached a turning point as 2016 continues to be the year that the shit all hit the fan.

In America, the tide is turning. This presidential election saw the Democratic contender Senator Bernie Sanders, an admitted socialist, gain enough support to almost upending the corporately-funded establishment candidate and frontrunner Hillary Clinton. On the other side, we have Donald Trump, a celebrity, bigot, soulless businessman, and showman, who is not an established Republican. But has resoundingly won their party’s nomination.

At the time of this writing, Bernie Sanders has thrown his newly found political clout to behind Hillary Clinton for President, after losing to her in the primaries. In effect, Bernie threw his support behind a candidate who represents a party that likes to pretend it stands on the higher moral ground. But, as the DNC Leaks showed, has little moral high ground to stand on. He threw his support behind a party whose current leader, President Obama, has carried out an extensive droning campaign in the Middle East. Whose current Presidential nominee voted for the War in Iraq. Whose most popular star (Bill Clinton) was the chief architect of mass incarceration and the militarization of the police in America. Bernie’s decision to support Hillary arguably has lost him a massive amount of street cred and some self-respect in the process.

The tide is undoubtedly turning, but it’s not clear in what direction.

There is a 50% chance that Donald Trump will become the next president of the United States. According to the latest polls, Trump is now leading, after the shit show that was the 2016 RNC Convention in Cleveland, OH. What led to this strange and unprecedented turn of events?

He tapped into some of the same anti-establishment sentiment that Sanders tapped into.

I contend that both Donald Trump and Bernie Sanders are anti-establishment candidates and representation a citizen revolt against “politics as usual.” Both major political parties have failed to realize that the American people are not as gullible or dumb as they think. Sander’s and Trump’s campaigns plugged into the anger and isolation that ordinary people feel towards the current political system and status quo. There’s still a recession for many people that hinder this nation from being the best in the world. Lack of educational opportunities, low access to quality health-care, low wages, the rising cost of living, lack of affordable housing, and lack of vision for the future of the country have jaded people about the current political process.

Ironically, the agents of change for this election are two old white guys. However, there are some crucial differences between these two old white guys and their campaigns. Bernie Sander’s campaign represented a hope that all people could get ahead and that the system could provide a robust social safety net for all citizens. His base is the Occupy Wall Street crowd. The Trump campaign, on the contrary, is all about fear and doom. They are the Tea Party and Birther camps who want their country back.

I didn’t get the memo that anyone had taken it from them.

Trump’s campaign has highlighted the worst of American culture: racism towards black people, xenophobia toward Mexican immigrants and Chinese businesspeople, and sexism toward women who don’t stay in their place. If Trump weren’t a celebrity and full-time human troll, his campaign would have been derailed months ago. Pat Buchanan put it best: Trump represented the “Great White Hope.” The last remnant that older blue-collar white males and conservatives cling to by harking back to the ‘so-called’ the good ole-days. These white male Baby Boomers hope Trump can give them back the country that was promised to them when they were young. A darker, gayer, diverse, more gender-equal and Latinx friendly America scares the crap out of many of them, for it is not the country they were promised.

At the end of the day, I don’t blame Trump for who he is. He’s a self-centered psychopath who wasn’t born into the elite “old money” class but who was born into “new money” and lots of it. Many of my fellow Americans feel that he’s one of them, and he’s tapped into their fears to scare upvotes. Democrats put their money behind a person who has been under the microscope since her days as First Lady. A woman who is perceived to be as establishment as one can be with very little charisma. In today’s celebrity-obsessed and 24-hour news culture, she has an uphill battle to defeat Trump’s celebrity and the cult of personality.

There’s a scene in the Dark Knight where Alfred confronts Bruce Wayne about the unstable and dangerous Joker. Realizing his friend and son figure doesn’t quite understand his twisted and psychopathic nemesis, Alfred simp  nnfN tells Bruce Wayne this about the Joker:

“…some men aren’t looking for anything logical, like money. They can’t be bought, bullied, reasoned, or negotiated with. Some men just want to watch the world burn.”

It’s an extreme comparison, but Trump has been banking off the chaos and disorder the electorate feels today. His nomination speech was all about painting a world where absolute instability is the norm, a world from which only Trump can save us all. Like the Joker, Trump doesn’t have a plan. He just does and says things to get a reaction, mostly on Twitter nowadays. He has insulted nearly every group of people in the American population. But he only went up in the polls more and more, after each insult. Win, lose, or draw, Trump will make more money and gain more notoriety. If he does become president, he will watch the world burn. The scary part is how many of our fellow American’s want to stand by his side and watch it all burn…