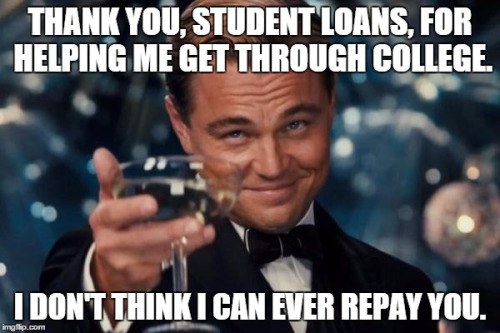 When I was 17 years old and set to graduate from high school, my mother told me she couldn’t afford to send me to college. Like most young people, I was sold the dream of college. I wanted a better life for myself, but my family was poor. Like really poor. Growing up on the Southside of Chicago, many of my peers were in the same boat.  I wanted an intellectual expansion and a job that would pay me a living wage, which college would be able to grant me.

Or so I thought.

I ended up joining the Navy and was able to go to college on the G.I. Bill. I got my undergraduate degree for next to nothing. But I was an idiot and decided to go to get my social work degree (not a career you choose if you want to ball like 2Chainz or Weezy) from the University of Chicago. Nowadays, I cry myself to sleep every night holding my master’s degree and avoiding any calls from FedLoan Servicing.

The cost of college is no joke, so much that the fact that many universities and colleges are considered nonprofits is almost laughable. The cost of college tuition has skyrocketed since the decade of my birth. Every March, millions of fans across the country tune in for March Madness. In the process, colleges and universities make millions of dollars from advertisers and corporate sponsors, yet puzzlingly 1) can’t afford to reduce tuition for students, and 2) pay their student-athletes. In fact, many student-athletes can’t afford to eat three square meals a day, or (in some cases) eat a meal at all. The kicker is that, despite this bleak reality, student-athletes still fare better than most of their peers because at least they get tuition-free college.

Some people joke that college students are all poor but really have mommy and daddy paying their bills. That joke only pertains to the minority of privileged students. For many students, the financial burden of obtaining a higher education is far out of reach and comes with the reality of crippling, lifelong debt. Students from poor and lower-middle-class backgrounds are genuinely feeling the pressure. This has only gotten worse since I graduated well over a decade ago.

Bernie “the insane socialist” Sanders might be the second most divisive man in the U.S. politics (outside of Agent Orange “I love my daughter in a very uncomfortable way” Trump). But Bernie was on to something with his policy proposal to make college affordable to all. This is something done in many Western Nations but not in the so-called “greatest country of all time,” the United States of America. U.S. critics claim that free college is socialism. Well, paved roadways, public libraries, the Post Office, the fire department, and the water you use to flush your crap down the toilet are all socialist in nature. Somehow, we’re all okay with that type of socialism but think making college free is a step too far.

College students shouldn’t have to go hungry, pimp themselves out, couch surf, or not have a stable place to stay just to obtain a degree.

All is not lost, though, and there are some sensible solutions to this crisis:

But this is all probably just a little too much socialism for ‘Murica.