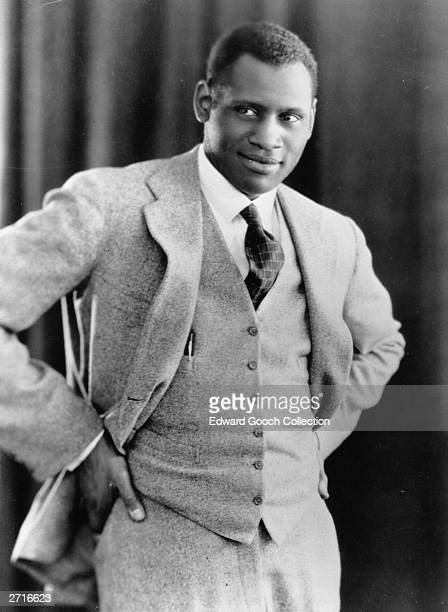 Welcome to the “Black History Month” edition of the Evolving Man Project’s Evolved Man of the Week’ profiles. Each week in February, we will highlight a historical black male figure who embodies what it meant to be an evolved man, famous and non-famous alike. The world needs to know their stories and deeds. This week’s honor goes to the singer, athlete, actor, and international activist Paul Robeson.

Paul Leroy Robeson was born on April 9, 1898, in Princeton, New Jersey, to Anna Louisa and William Drew Robeson, an escaped enslaved person. Robeson’s mother died from a fire when he was six, and his clergyman father moved the family to Somerville, where the youngster excelled in academics and sang in church.

He gained fame as one of the greatest football players ever, earning back-to-back first-team All-America honors in 1917 and 1918 at Rutgers University. But Robeson was a scholar as well. A member of the Rutgers honor society, Cap and Skull, he was chosen as valedictorian of his class, and after earning his bachelor’s degree, he worked his way through Columbia Law School while playing professional football.

In London, Robeson earned international acclaim for his lead role in Othello, for which he won the Donaldson Award for Best Acting Performance (1944) and performed in Eugene O’Neill’s Emperor Jones and All God’s Chillun Got Wings. He is known for changing the lines of the Showboat song “Old Man River” from the meek “…I’m tired of livin’ and ‘feared of dyin’….,” to a declaration of resistance, “… I must keep fightin’ until I’m dying….”. His 11 films included Body and Soul (1924), Jericho (1937), and Proud Valley (1939). Robeson’s travels taught him that racism was not as virulent in Europe as in the U.S. It was difficult to find restaurants that would serve him at home, theaters in New York would only seat Blacks in the upper balconies, and his performances were often surrounded with threats or outright harassment. On the other hand, in London, Robeson’s opening night performance of Emperor Jones brought the audience to its feet with cheers for twelve encores.

Paul Robeson used his deep baritone voice to promote Black spirituals, share the cultures of other countries, and benefit his time’s labor and social movements. He sang for peace and justice in 25 languages throughout the U.S., Europe, the Soviet Union, and Africa. Robeson became known as a citizen of the world, equally comfortable with the people of Moscow, Nairobi, and Harlem. Among his friends were future African leader Jomo Kenyatta, India’s Nehru, historian Dr. W.E.B. Du Bois, anarchist Emma Goldman, and writers James Joyce and Ernest Hemingway. In 1933, Robeson donated the proceeds of All God’s Chillun to Jewish refugees fleeing Hitler’s Germany. In New York in 1939, he premiered in Earl Robinson’s Ballad for Americans, a cantata celebrating America’s multi-ethnic, multi-racial face. It was greeted with the largest audience response since Orson Welles’ famous “War of the Worlds.”

By the late 1940s, Robeson’s international artistic reputation was well established, but it was rivaled by his reputation as a political activist. Racism generally, and the horror of racial lynching particularly, were Robeson’s greatest concerns. If his outspoken views on segregation didn’t win him enough enemies in the United States, his openly leftist leanings certainly did.

A beloved international figure with a huge following in Europe, Robeson regularly spoke out against racial injustice and was involved in world politics. He supported Pan-Africanism, sang for Loyalist soldiers during Spain’s civil war, took part in anti-Nazi demonstrations, and performed for Allied forces during World War II. He also visited the Soviet Union several times during the mid-1930s, where he developed a fondness for Russian folk culture. He studied Russian, as did his son, who came to reside in Moscow’s capital city with his grandmother.

Yet, Robeson’s relationship with the U.S.S.R. became a highly controversial one. His humanitarian beliefs seemingly contrast with the state-sanctioned terror and mass killings imposed by Joseph Stalin. In the United States, with McCarthyism and Cold War paranoia looming large, Robeson found himself contending with government officials looking to silence a voice who spoke out eloquently against racism and had political ties that could be vilified.

Robeson published his autobiography, Here I Stand. In 1958, the same year, he won the right to have his passport reinstated. He again traveled internationally and received many accolades for his work, but the damage had been done, as he experienced debilitating depression and related health problems. Robeson and his family returned to the United States in 1963. After Eslanda died in 1965, the artist lived with his sister. He died from a stroke on January 23, 1976, at 77, in Philadelphia, Pennsylvania.

Paul Robeson was not only living proof of racial equality but something still difficult for scholars today to grasp or even define. Within the leftist world of greater New York and cities beyond, he reigned as a supreme symbol of hope.

“The artist must elect to fight for Freedom or for Slavery. I have made my choice. I had no alternative.”

Paul Robeson is a man who could have used his various talents and massive success to live a life of luxury; which was rare for a black man in his day, but he chose to challenge the status quo. He used his international fame to uplift the struggle of the masses of oppressed peoples and workers across the globe. He stood for international solidarity and promoted racial egalitarianism. Paul was a man of many talents and stood as a true renaissance man. Today we honor Paul Robeson as our Evolved Man of the week.